How these „meetings“ have been going for me personally 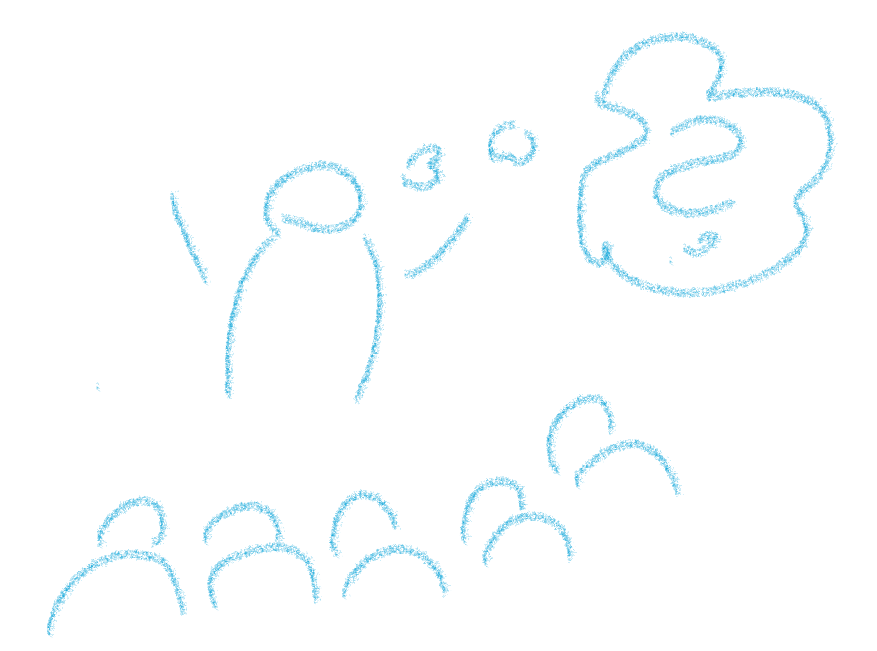 Yet instead, the afternoon before such an evening meeting, I am worried:

Can you be that great facilator-listener-animator that you would like to be? You have seen it, have seen others who were fully present, were able to inspire a room of people with their own mood. But can you be that?

Then there are all those practicalities:

Who prints what, how many copies? The number of copies is an implicit guesstimation of how many people will show up tonight. Will you be diaspponted if you carry 20 of those 30 copies back home with you tonight? There is this presentation you will give and the slides are not ready yet. Will it be too long, too short? Won’t you be ending up talking at the people rather than with them? Wil person X be there to open the doors of the school for us?

It is not like this is the first time. And my feelings on a day like this have varied a lot during the past months.

My first two meetings, I had very expectations towards myself: I let the adrneline, the excitement build all afternoon. I thought, the more excited and nervous I am, the better it will be. the evening was supposed to be great, so my expectation towards myself was : „Be badass“.

Those are high expectations. Of course I was nervous. And people saw it during the meeting.

When I gave my presentation, it was rushed, just because I wanted to finally get it off of my chest.

Internally, I am resignating. I will not have ANY expectations for tonight. Or better even, in my head, the meeting has already failed before it started. I am convinced it will fail, it must fail, like the others. If I am convinced of this I wont be surprised. Then i am „right“ again. I won’t have managed to pull off engaging participation, but at least, things that happen around me match my world view again. „I knew it“. It is as expected, nobody came.

This time I am not even trying to get excited. In fact I am listening to an off-topic podcast all the way to the venue, In a way, I have given up before I even arrived.

DId that make the meeting better? Haha, not really, because in the end, even though only a few people (6 or 8) came, they were engaged, they liked the evening and enjoyed it. And I was not fully present.

Tonight will be weird. I resignated from my project. I don’t want to deal with it any more. It is a personal failure for me and I was close to a burn out. So the only way out seemed to resignate. To tell myself, that there are too many external circumstances, too much surrounding the project where I cannot influence what happens.  It is painful to see as wrong turns are made, knowing that you are just one person and cannot change the way your organisation operates.

I am supposed to help steer the project in the right direction. But I have not managed. And now I am trying not to care. I will be present tonight, to observe and to support. So that things don’t fall apart without me. But I am trying to tell myself that the outcome of the meeting is not my responsibility. I am still taking on small manual tasks that are rather on the creative end.

This afternoon, I was trying to get a few plain maps of the neighborhood printed out, so that people could sketch on them, point to stuff. Why could I not just find a map, without any stress? Instead, I blew it out of proportion in my head. I had a  few maps but they were not „good enough“, either too pixeled or too zoomed out or had ugly google maps text on them. And once I finally had one, the printer was out of A3 paper. Nothing was good. For close to an hour, I got back into a tiny spiral of: „I am supposed to be an expert in enabling people to play with their ideas, concretize them. And I fail in printing a map? Great.“ and in parallel: „Why are you stressing at all? There is a very real chance that noone shows up, and all this worrying is for absolutlely nothing…“

Last night was the meeting. It started out awkward, exactly how they are not meant to be:

By 19:20, only 2 citizens were present and some 7 full time employees.

Overkill, absolute overkill. We were about to stop it. My colleagues came over and aksed: „Shall we go home, does it make sense with only two people?“ If I had said „Let’s go home“, we would have gone home. Instead I said: „John* is here, he handed in a concrete idea, and the other guy is fine with working on anything. Let’s just work on John’s idea.“

And as we sat down, three other people came! Puh, 5 makes a group, thank God!

And there we come to the struggle of undefined hierarchies and double team leads. My female colleague and I share responsibility sort of equally. We want each other’s agreement on decisions. Even though I am trying to signal that I am stpping back, she is insecure herself and would like my consent and agreement. So, in front of all people present, her and I went into a Mini-Discussion as to whether we now do the „planned“ program of introducing the tables or whether we continue jumping straight to John’s idea. Awkward.

I ended up to sit down with the three newcomers, on the table with ideas that were closest to where they lived. Time to improvise! My male colleague retired to being quiet and take notes, it was obviously up to me to guide this table. The civil servant of the commune and a traffic expert joined as well. Now, on the table were 8 vagues ideas submitted by other citizens, a few maps and an sheet of paper with two axes. Goal of the evening was to rank the 8 ideas, based on the prarameters of sensibilisation and urgency. This is what I explained to everyone.

Now, this was a tricky situation: 3 people who have never had the chance to express their own ideas, make up their mind what they want, sitting across from three professionals. This fulfills the process step: „Citizens will sort and prioritze ideas in small groups“. BUT: How will these three citizens feel about this? How will they feel heard rather than used in a process that did not care about them personally, that just needed some citizens to sort through these ideas?

Our table got off to a whacky start: I had the stack of 8 ideas in front of me and presented the first idea to the citizens: „Someone suggests to put a traffic light here at this crossroads, what do you think?“. As I did it, I realized, that might have not been the best way forward. Me and the other two professionals know that this idea is not that simple and that there are points a), b), c) to consider. So what do we do? Since I read the idea out, people felt compelled to tell me, what they think about this idea. The municipality officer looked me into the eyes when explaining what the consequences would be, the citizens also looked me in the eyes when they said, how maybe nobody would respect that traffic light.

So in a way, the citizens just had to listen to all the buts and ifs of all their ideas. I think they did not mind it that much and they found it quite interesting. But I was the anchor point of the group, since there were no citizens that had strong ideas, who wanted to talk to the municipality. These three were happy to do whatever I told them.

On top of that, we were now talking about a very specific crossroads (and there were a few more ideas about specific locations), yet all the maps we had were vague and of the whole area. Are we doing crossroads planning or wider thinking of the wider area? A few times we were discussing now specifc situations, based on our memory: „I think the right of way is that street; I think there is a pedestrian crossing, here, but not sure.“ Not great… The mobility planner of the municipality must have been thinking: „if I now had our streets database, I could look these streetcrossing designs up…. Now we just talk about what we think is there.“

For some of these ideas, the citizens made concrete alternative proposals. So in the end we positioned some of the orginal ideas and some of the citizen’s sponatanous alternatives on the ranking grid between urgency and sensibilisation. In fact, it was me who took pen and post-it and wrote down only those ideas amongst the ones discussed which I understood as feasible. So there was an implicit filtering by me, down to the ideas I knew the municipality could theoretically imagine.

This was supposed to be the great and fun co-design workshop. We were far from it. I wonder whether we see any of the participants again.

Join me as I grapple with the challenges of designing effectiv public participation. I am undertaking a PhD in Sustainable Mobility, hoping to engage citizens in improving the traffic safety of their neighborhood. Here I document my emerging thoughts and intermediate conclusions. I try to find answers to the questions I struggle with myself.